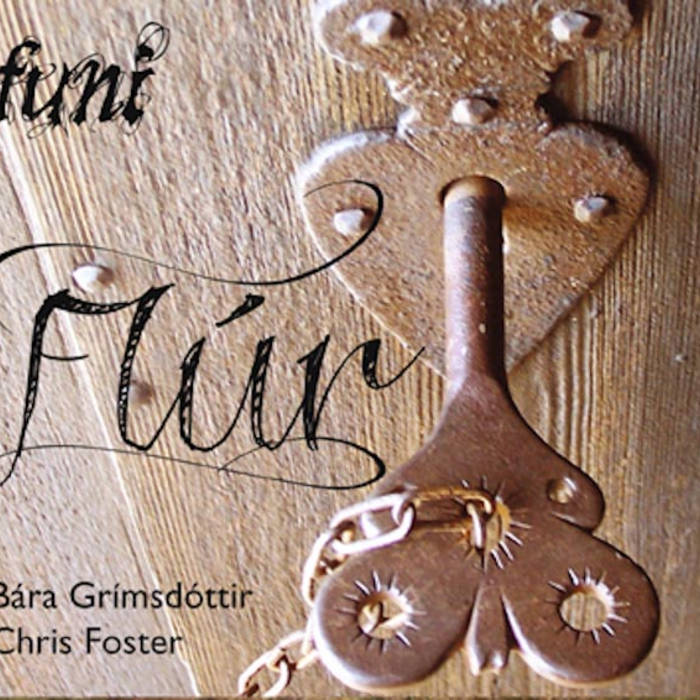 Lynn Noel I fell in love with the Seafarer's Prayer at Mystic in 2012 and cannot wait to hear more of FUNI in 2018! Favorite track: Sjóferðabæn / Seafarers’ prayer.

Anita Botman Beautiful! She has a stunning voice. The album sounds very genuine and traditional and yet fresh and modern. A timeless record.

FLÚR is the second full length album released by the Reykjavík based duo FUNI. The songs on the album are drawn from the kvæðalag, tvísöngur and hymn singing traditions of Europe’s most remote nation. Despite Iceland’s high musical profile, its unique and varied folk song heritage has, sadly, remained largely unheard and unknown by today’s folk and world music audiences. The fifteen songs on FLÚR represent a small but significant step towards remedying this state of affairs.

In the past, these songs were usually performed unaccompanied. Now, Bára Grímsdóttir and Chris Foster add accompaniments using the traditional Icelandic langspil along with kantele, guitar and hammer dulcimer. On FLÚR, they are also joined by Andri Eyvindsson, saxophone and vocals; Birgir Bragasson, double bass; Hafsteinn Þórólfsson, vocals and Lárus Grímsson, clarinet.

The disc comes in a beautifully designed digi-pack, which includes a 32 page illustrated booklet with introductory notes and full song texts in both Icelandic and English.

FLÚR - is an old Icelandic word that means decoration. It comes from the same root as the English word ‘flower’ and it can signify either musical or visual ornamentation.

FUNI - an old Icelandic word meaning flame or fire - are Bára Grímsdóttir and Chris Foster, consummate performers of the traditional songs of Iceland and England. They started working together in 2001, breathing new life into great songs that have been hidden for too long in old recordings, little known books and manuscripts. They also add new songs to the tradition.

Bára and Chris have toured widely in mainland Europe, as well as throughout Iceland and Britain. They have also performed in China and made five visits to the USA.

Bára Grímsdóttir is simply one of Iceland’s best traditional singers. She is also widely respected in Iceland as a composer, especially of vocal music. She started life surrounded by the folk songs of her parents and grandparents on the family farm Grímstunga in the north of Iceland. Bára has a special interest in the old rímur and kvæðalög styles of song, but she also sings in other traditional styles, both secular and religious. In her role as composer and arranger, Bára continues to draw on the well of traditional Icelandic music, while as a performer, she invests the traditional songs that she performs with a natural authority born from having been surrounded by them from birth.

Chris Foster grew up in Somerset in the south west of England. A master of his trade, he was recently described as “one of the finest singers and most thoughtful inventive guitar accompanists of English folk songs, meriting legend status.” Over the past 40 years, he has toured throughout the UK, Europe, Canada and the USA. He has recorded six solo albums as well as working on many collaborative projects. On stage, his fine musicianship and powerful singing is underpinned by an urbane wit and engaging enthusiasm, which draws his audiences into the ancient world of storytelling through song.

FUNI, an old Icelandic word meaning flame or fire, are Bára Grímsdóttir & Chris Foster. Since 2001, they have been breathing new life into great songs that have been hidden away in old recordings, old books and manuscripts for too long. They also add new songs to the tradition. Bára and Chris tour widely in Europe, as well as Iceland and Britain. They have also played in China and the USA. ... more

Bandcamp Daily  your guide to the world of Bandcamp